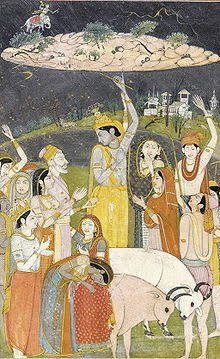 Bhati (Hindi: भाटी (Bhati),(Bhatti / भटटी)) is a Chandravanshi caste (or clan) and is one of the largest tribes among Rajputs. They claim descent from the legendary king Yadu who founded the Yadava, dynasty, the first Chandravanshi, (or Lunar Dynasty). Bhatti are a Yaduvanshi,Rajput clan. They reside for the most part in central Punjab, the Jaisalmer region, in border villages of Bikaner and some tehsils of Jodhpur (Osian and Shergarh), India. The Bhati are also found in Uttar Pradesh. They are divided into about forty gotras or clans.


Bhatia is originated from Sindh Province and Rajasthan.The Bhatias of Northwestern India and Pakistan are descendents of the Bhati Rajputs of Jaisalmer.Bhati and Bhatti are one and the same tribe. They are mainly found among Gujjars, Yaduvanshi(Yadav), Rajputs, (Bhati), Khatris, Jatts a majority of whose members follow Hinduism.

Among the known varieties of Bhatias, there are Kutchi, veha, Halai, Kanthi, Navgam, Pachisgaam, Thattai, and Punjabi. Bhatias from Kutch are Kutchi Bhatias, those from around Jamnagar district are known as Halai (Halar means Jamnagar) Bhatia, those from Sindh (in present day Pakistan) are known as Sindhi Bhatias,and those from Punjab (in present day India & Pakistan) are known as Punjabi Bhatias. A large number of Punjabi Bhatias (whose main clan is Gujjar) settled in Pakistani Punjab in 1947, they are landlords and reputed businessmen in Pakistan. Among Sindhi Bhatias, many are further identified from their place of origin (e.g. Hyderabadi, Thattai, Nasarpuri Bhatias,).To explain that a further people from the town of "Thatta" are called "Thattai".Most Sindhi Bhatia's have made their mark across India, Gulf, Southeast Asia and so on.In state bahawalpur, a large number of Saraiki Bhatias are present and extend from Badin(sindh) to jhang district(punjab) and are known as Vehas. In Punjab, Bhatia's are considered to be Mair Rajputs or Sikh Rajputs in Plains of Punjab.Some of the major groups derived from the principal professions they follow or the crafts they practice.

Thattai, Halai and Kutchi Bhatias are the followers of Vallabh Acharya. He put forward a way to worship Sri Krishna called Pushtimarg. They are strict vegetarians who do not eat even onions and garlic and are devoted to Srinathji, the child form of Sri Krishna. Their main place of pilgrimage is Nathdwara situated 48 km north east of Udaipur in Rajasthan, on the banks of the Banas River. Many of the Thattai Bhatias have settled in Gulf countries for their search for new business opportunities.

Punjabi Bhatias are prominent in India. They are dispersed in the Punjab region and Delhi region of India.Punjabi Bhatias are also widespread around the world mostly in the UK and US. Punjabi Bhatias exhibit much Punjabi pride as Bhatias trace back to the warrior caste and are seen as one of the many defendants[clarification needed] of the state of India.

Rawal Jaisal belonged to the Yadav Clan and was a Bhati Rajput. Rawal Jaisal founded the city of Jaisalmer in 1156 AD. The new fort that he built was on a hill called Trikuta.